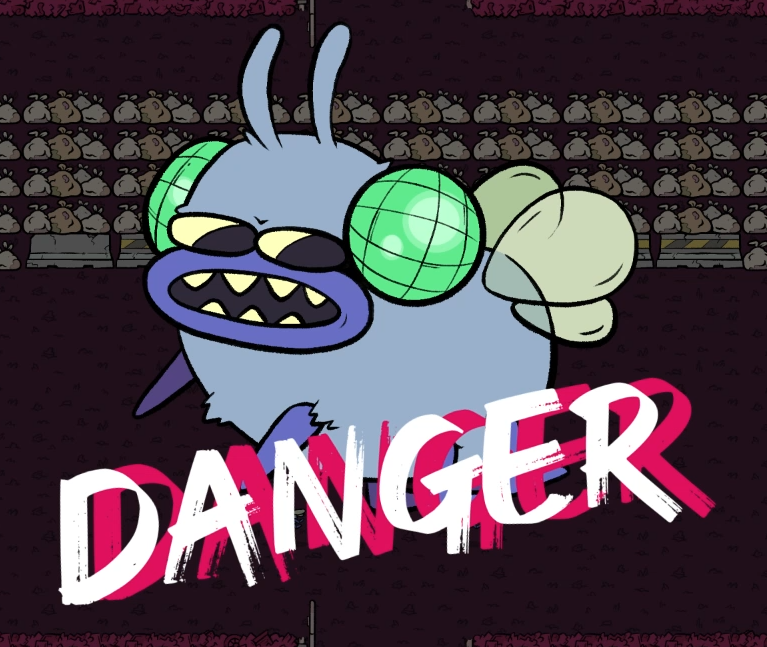 Instead, my friend played the concept stage, and mentioned how they could get the enemy to knock itself out without Worm really moving at all. That seems wrong. Worm should be hustling around, nimbly dodging and weaving etc. So I thought "maybe I just need an enemy that harasses the player."

Peek Inside My Brain Dome

I never really make things without first coming up with the artistic concept. Some other, perhaps better, game developer would just create a featureless rectangle enemy to figure out the code and make sure the concept makes sense before devoting time to creative graphical assets. I can't do that. I need the funny lil guy on the screen or I am instantly bored. So I thought about what kind of creature might harass the player.

To effectively uproot the player, the enemy needs to be able to get to them anywhere, which means ignoring the  blocks on the stage. So, I turned to the humble garbage-loving fly. Here's my first doodle... 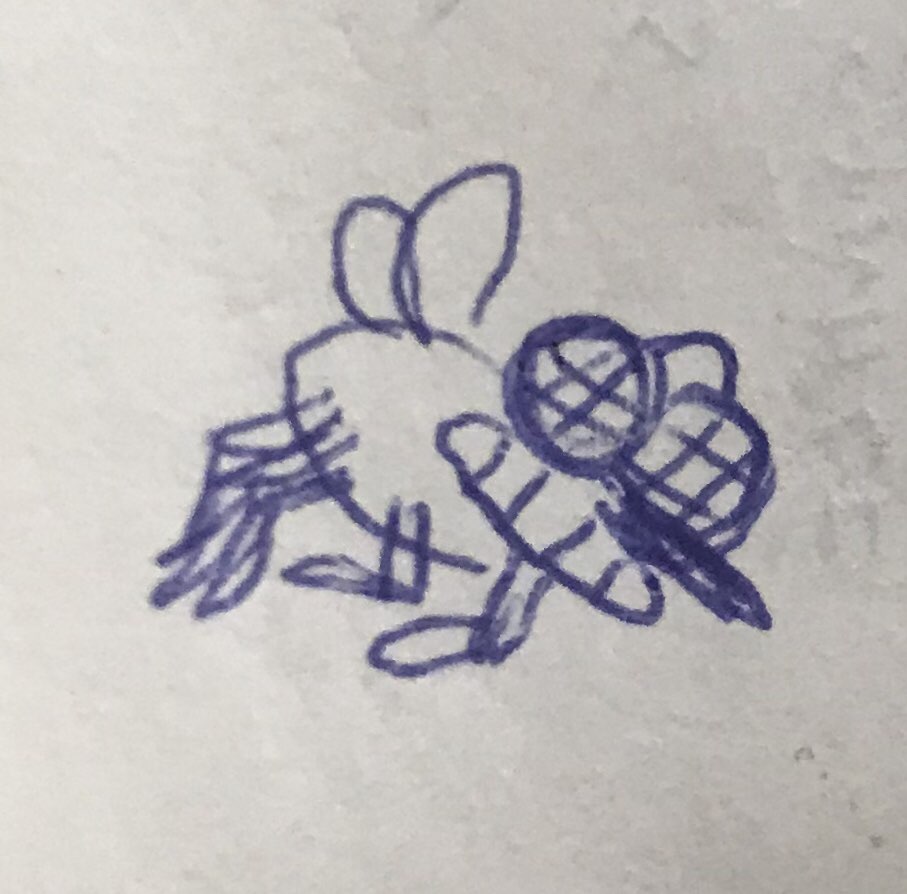 Didn't love it. Too basic. Then I had this idea; 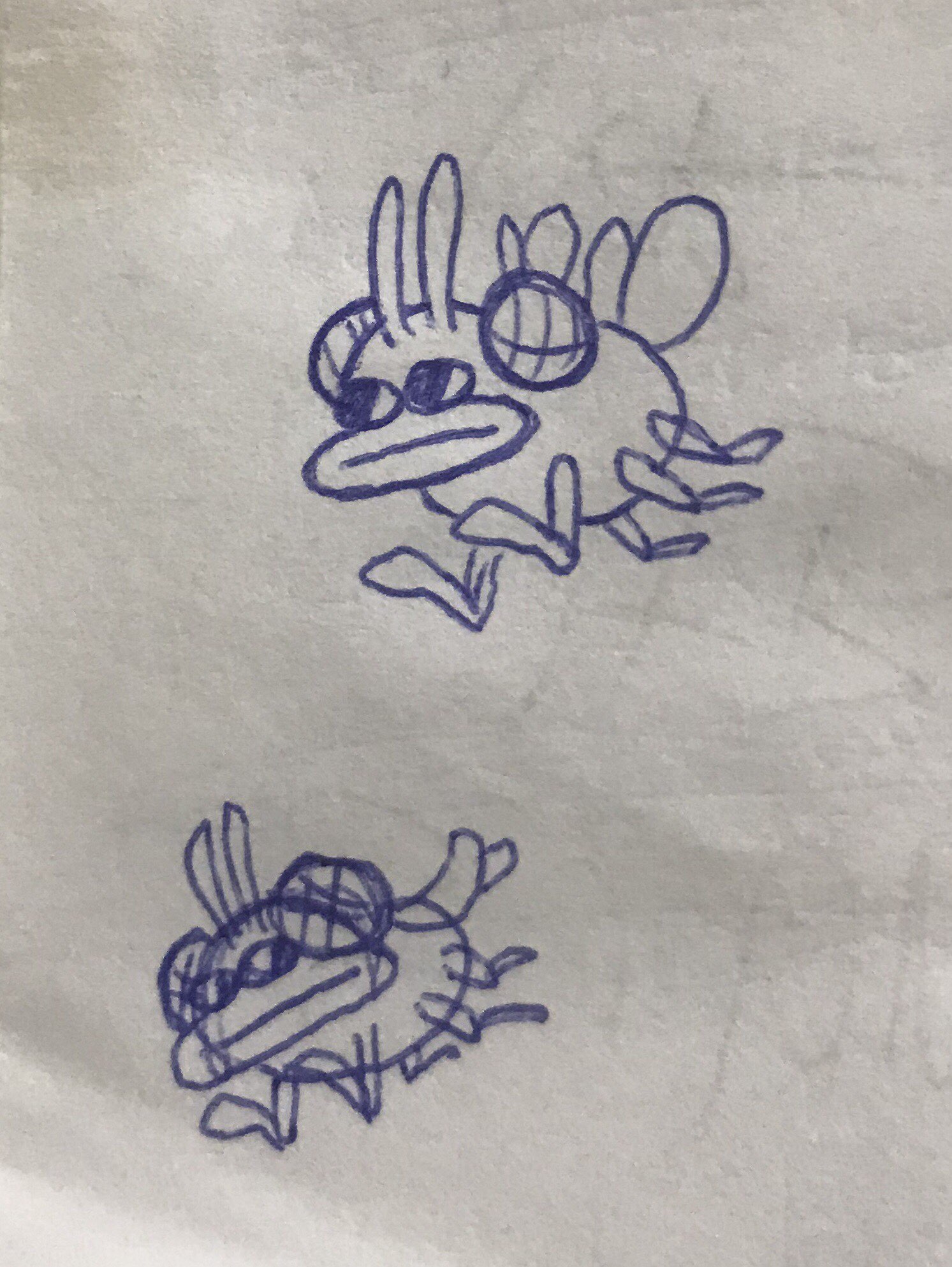 Ho ho, now we're cooking with gas. Some false eyes that look like headphones, plus a big mouth for taking bites out of our heroes. This gave me another idea though; what if the newly dubbed "Gly" was so hungry that it bit everything indiscriminately? This could add all kinds of fun enemy/enemy interactions. With that in mind, I went to draw some sprites.

Not much to say here. I work in Procreate on iPad and then color/test/export with Photoshop. There's probably better ways to do it but I refuse to learn anything new unless I absolutely have to. I wanted the flying animation to look like it's swimming through the air doing a little arm paddle, so at the bottom of the stroke it pushes up, doing a bob. I'm actually doing this with physics in GameMaker! There's a continued downward force on the Gly that it pushes against every time it's at the bottom frame of the animation.

The second problem was that, flying enemies didn't interact with blocks, which means they were basically immortal unless killed by an aggressive enemy. Oops! That seems less than ideal. So I made a hazard block that affects everything.

(Note the unbreakable concrete barricade blocks, which are also new!)

Barbed wire hurts ground enemies as normal, but also hurts Worm if they run into it, and also hurts flying enemies if they fly through it! Hurray, problems solved. Finally, here's a full clip of some Glies (Glys?) harassing the player while Chomper does its thing.

(I changed the color of the barbed wire shortly after creating the first clip because I wanted it to be more visible to the player.)

And there you have it, the Voracious Gly!

Ok that's it! See y'all later!